Carrying a Gun for Self-defense – A Know-how

HomeCarrying a Gun for Self-defense – A Know-how 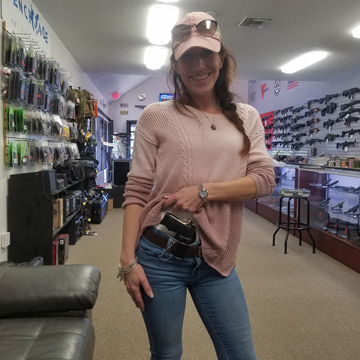 All over the world, women safety is a prime concern. There are a very few cities on the globe, which can actually call themselves safe for women, especially when they are travelling in the night. There is always a constant threat to a woman and her family when she is on the run especially during the wee hours. But it’s up to us if we want to live with that constant fear all the time or take steps to combat that fear and come out of it as a winner. There is a lot of awareness been created these days on Self Defense training for women and how to protect them while they are all alone! There are several women only training classes arranged wherein self-defense training like taekwondo, Karate and other forms of Martial arts are taught. Many women also take shooting classes and carry permit guns with them for safety.

When you enroll into a shooting training class, they also teach you how to conceal carry permit guns. ‘Conceal carry’ is basically a term given used to carry a gun in a concealed manner, which means it should not be visible to anyone that you are carrying a licensed pistol or gun. Conceal carrying a gun is not an easy task though; especially because of the type and fabric of clothing that women wear. Hence it is important to get trained on how to carry a concealed gun as well. Many think: Guns and Women don’t go very well together. We are here to prove them wrong. With proper training and some good tactics, a gun can be carried easily without anyone being aware of it, while in a public place as well.

However before actually carrying a gun in a public place, you need to first know the rules of that country and State. If the state rules permit carrying a concealed gun, then you can follow the guidelines and carry it along. There are many different types of holsters that are available for carrying a gun; however you need to be comfortable carrying it and should be not be visible as well. As women clothing is generally tight fitted and body hugging, having a conceal carry becomes extremely difficult. If you are wearing an A-line dress or Frock, it poses further problem as the belt is absent in which you can cling the gun.

Holsters are designed for easy carrying of guns. Although, most Holsters available online or in Gun shops are designed for as per the male body type, but you can surely find something suitable to you if you look aggressively. Once you have bought a holster for yourself, ensure that you wear it a few times to get used to it. Practice fitting your gun into the holster and wearing it out as well, else you will be stuck in situations of emergency when you will be struggling to take out your gun from the holster.
Conclusion: Being a CCW Woman (concealed carry woman) is not an easy task, but it is certainly advisable considering changing times and growing crimes against women. Ultimately, it is better to be Safe than being Sorry. 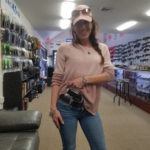